Home > Uncategorized > For Porter Ranch, Saddleridge fire is the latest disaster on a growing list 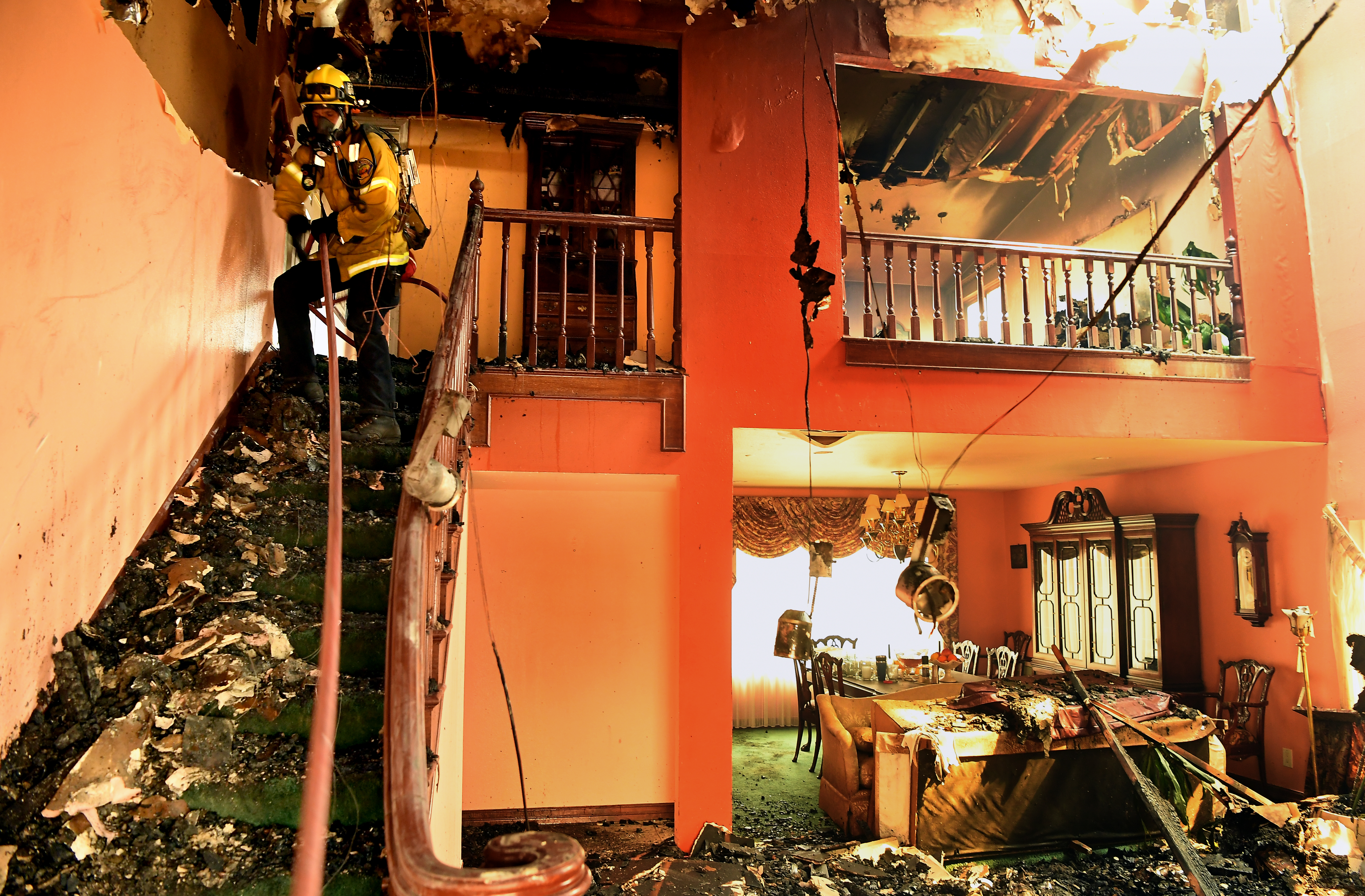 Disaster is no stranger to longtime Porter Ranch residents. The community has been battered by brush fires, earthquakes and four years ago the largest natural gas leak in United States history.

Then on Thursday night another crisis appeared at the doorstep of the foothill community in northern San Fernando Valley.

Out of nowhere, spot fires ignited homes and sent hundreds of residents fleeing.

For many Porter Ranch residents, measuring the years is also about tallying calamity. They talk about the 2008 firestorm that caused evacuations and property losses. They talk about the long-term effects of the 2015 natural gas leak from the Aliso Canyon facility. Old-timers also talk about the 1971 and 1994 earthquakes, whose epicenters were not far from the community.

Resident David Lasher can still point to a stretch of his neighborhood where fires consumed homes.

“That one over there burned to the ground a decade ago, and that other one,” Lasher said. “The house behind me had the flames go over it and survived.”

On Thursday night, four houses on nearby Beaufait Avenue were consumed by flames as the fast-moving Saddleridge fire tore through the hills of the San Fernando Valley. Three of the scorched homes backed up to the now-blackened canyon wash.

Among them was Lasher’s father-in-law’s house.

One side of the house, where Lasher’s father-in-law has lived for 36 years, was charred by flames. The roof is gaping and buckled in places, while water sits an inch deep in the kitchen from a massive firefight that ultimately saved much of the structure.

Spared from the destruction was a grandfather clock, which sat near the curb of the damaged home Friday afternoon.

“That solid mahogany grandfather clock came through unscathed. It was in the corner,” Lasher, clad in a red U.S. Marine Corps T-shirt and goggles, said as he pointed into the living room.

Firefighters saved much of the house. The family plans to rebuild the rest, Lasher said.

Porter Ranch sits in a wind tunnel that during hot Santa Ana events erupt in flames. This week’s fire started in Sylmar and jumped the 5 Freeway and made a run at Granada Hills and Porter Ranch.

A huge fire in 1988 destroyed 13 homes and damaged 23 others. “It was raining fire, just orange everywhere,” Lasher said of the fire at the time. In 2008, the destructive Sayre fire caused evacuations.

Kim Thompson, who lives at the intersection of Sesnon Boulevard and Jolette Avenue in nearby Granada Hills, evacuated Thursday night with a sense of deja vu.

She thought back to the Sayre fires, which burned to the very edge of her cul-de-sac.

“We’ve been through a lot, but we choose to live here,” she said.

“You’re on edge. You think you get used to it,” Thompson said, the wind whipping ash and through the air, watering the eyes with smoke, “but you can’t really get used to this.”

This fire burned close to the Aliso Canyon gas plant, where the gas leak sent residents fleeing from their homes for months. Officials shut down the facility and evacuated. Firefighters were on the scene for protection.

The Aliso Canyon gas blowout lasted nearly four months and was blamed for sickening thousands of Los Angeles residents, who moved out of their Porter Ranch homes to escape a sulfurous stench and a medley of maladies including headaches, nausea and nosebleeds.

Just down the street from Lasher’s home, Chris Harian stood in his own front yard Friday afternoon watching as fire trucks and news vans zipped by.

The 33-year-old moved in four months ago and now his new neighborhood was transformed. The nearby hills were bare and black and flecks of white ash were still raining down. Some of his neighbors lost their garages — others lost their backyard guest houses.

A woman up the street was standing on her front porch crying when firefighters approached her, asking if they could inspect her partially charred home.

Harian’s young daughter wandered outside and clung to his leg.

Around 11:30 p.m., Harian said, police cars came through the neighborhood blaring their sirens and calling for residents to evacuate via loudspeakers.

The flames looked close. Some neighbors were panicking and blowing through stop signs. Harian — who works in marketing — dropped his two young children off at a friend’s house in La Crescenta, then returned home. He had left his gate open and wanted to check on the home one more time. It was around 1 a.m. when he returned and the situation looked dire.

“That house was on fire,” he said, pointing at a tan, single-story home up the street. “And that one too.”

Embers were raining down on his roof and a couple of spots were smoldering, Harian noticed. So he propped a ladder against the wall, dragged the hose up to the roof and put out the hot spots.

“I don’t think there’s much left to burn,” Harian said Friday afternoon, covering his mouth and nose with a damp paper towel. But he knew fires are unpredictable.

“It’s good I have insurance,” he said.