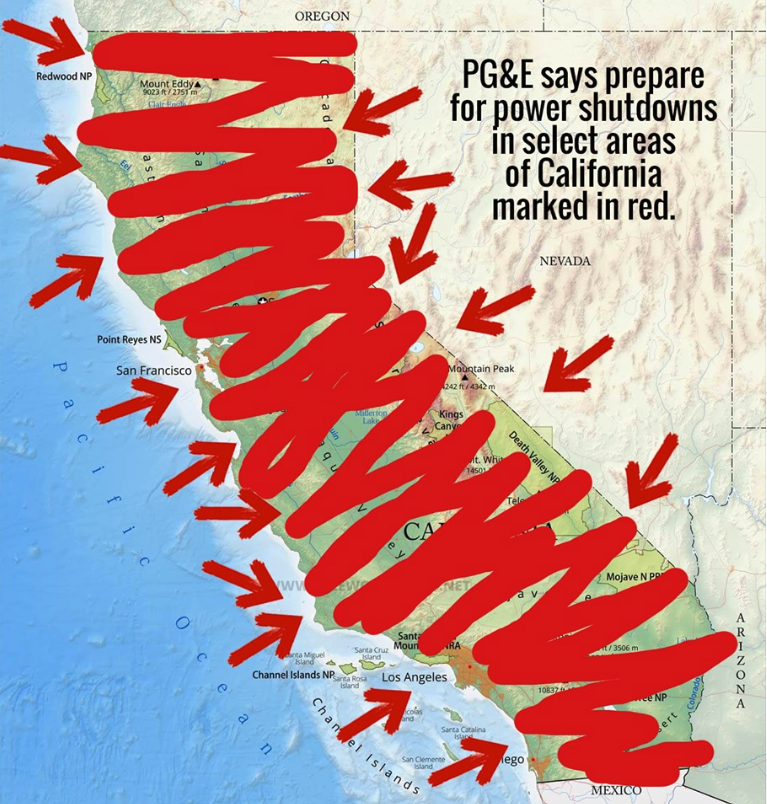 Amid the threat of an unprecedented power outage in Northern California, a local police department posted a tongue-in-cheek instructional message on its Facebook page that has been shared nearly 40,000 times.

The Pleasanton Police Department in Alameda County shared a map of California on Tuesday indicating where power outages could occur. But instead of highlighting the 34 counties affected by Pacific Gas & Electric’s decision to shut off electricity in an effort to avoid possible wildfires sparked by power lines downed by high winds, in the Pleasanton police map, the entire state was marked out in red. Alongside the image were rather unique instructions on how to prepare.

“If you come home and everything is dark and nothing works, then yes, you are experiencing a power shutdown. Remain calm. Use your cell phone light to search frantically for the one flashlight you think you have in the house. It will be dead of course. Search for batteries. You will need four but only find three,” one tip read.

Thousands of users. from both inside and outside the state have commented on the post. The majority seem to appreciate the break from what is a serious issue for many. Others criticized the local authority for stooping to such whimsy.

“Your humor worked better than a dry list of do’s and don’ts. Great strategy,” wrote one.

“Thanks for making me laugh so hard so early in the morning,” wrote another.

“If this wasn’t aggravating it would be funnier.”

“You should remove this post. It is not what is happening.”

Pleasanton police were not available Wednesday to comment on the viral message, as department officials were occupied with emergencies related to the outages.

The first power cutoffs began shortly after midnight Wednesday. Additional outages were planned in the afternoon and evening. It was unclear when power would be restored. In all, roughly 800,000 households were to be affected.

Southern California Edison said it also was considering preventative outages ahead of possible Santa Ana winds in the southern part of the state. The utility said that more than 173,000 customers could be affected.

For those facing outages, the American Red Cross offers several recommendations, including using flashlights instead of candles, keeping gas tanks full and storing enough food for at least two weeks.